The Legislation for Combating Conflict of Interest Promotes Integrity in the Public Function and Establishes the Principle of “Where Did You Get This”, by Disclosing Property or Private Business Carried Out by the Public Employee That May Lead to Conflict With His or Her Duties 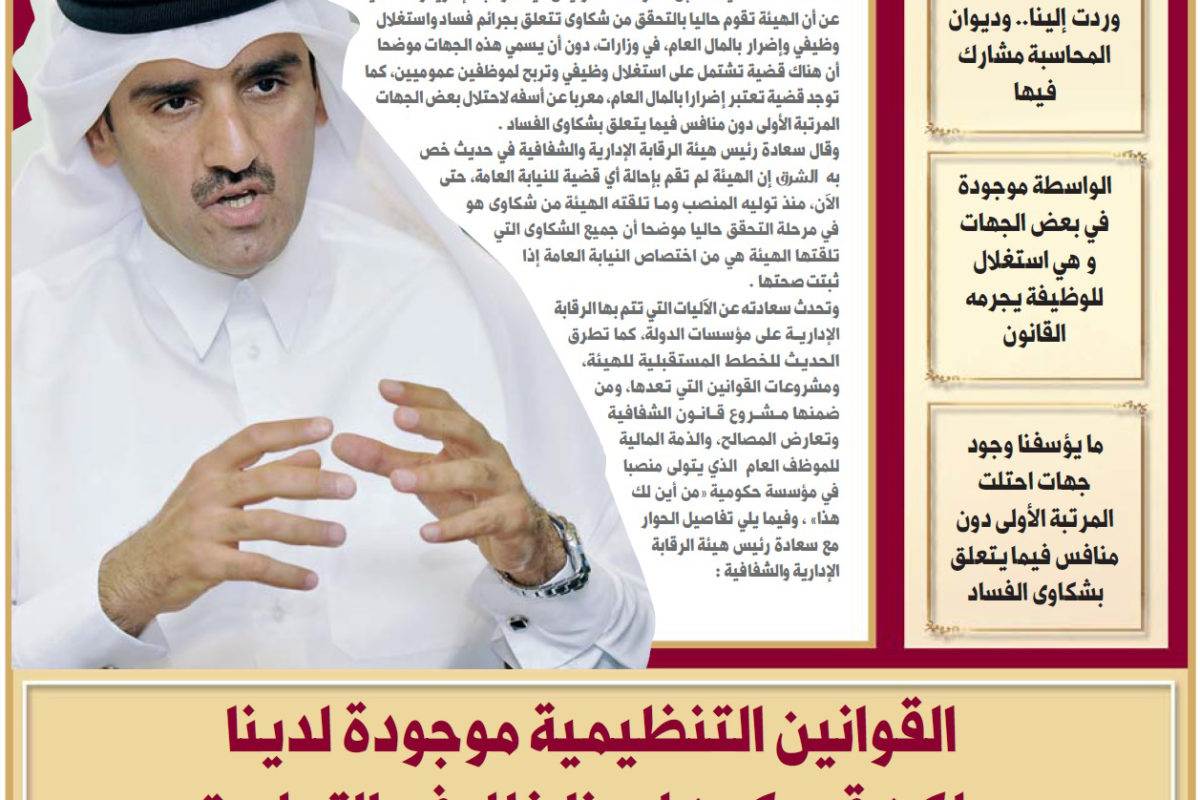 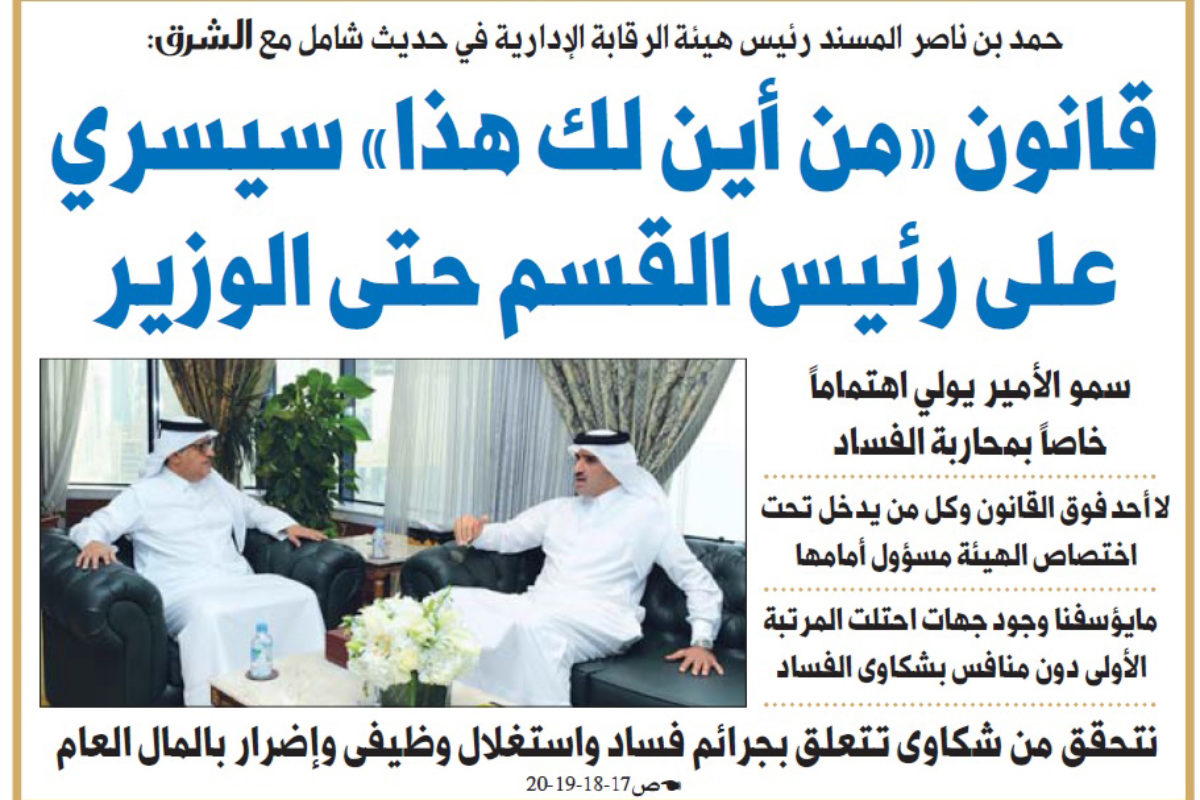 His Excellency Mr. Hamad bin Nasser Al-Missned, President of the Administrative Control and Transparency Authority in a comprehensive interview with “Al Sharq”:

No one is above the law. Anyone who falls under the jurisdiction of the Authority is held accountable

Regulatory laws exist however, we may have a flaw in terms of the application

The law of “from where you did you get this?” applies to all State employees from the head of department to the minister

We investigate complaints of corruption, functional exploitation, and damage to the public funds in ministries

We can overcome the delay of issues by reviewing administrative procedures

In the case of a malicious complaint, the complainant shall be referred to the Public Prosecution in accordance with Article 190

My message to the public opinion: Our ultimate goal is to achieve the country’s interest

His Excellency Mr. Hamad bin Nasser Al-Missned, President of the Administrative Control and Transparency Authority, revealed that the Authority is currently investigating complaints concerning corruption crimes, functional exploitation, and damage to the public funds in ministries, without naming them, explaining that there is a case involving functional exploitation and gain for public officials. There is also an issue that is considered to be damaging to public money, and he regrets the fact that some entities ranked first without competition in terms of complaints of corruption.

Furthermore, His Excellency spoke about the mechanisms by which the administrative control of state institutions is conducted. He also discussed the future plans of the Authority and the draft laws it is preparing, including the transparency and conflict of interest bill and the financial liability of the public official who holds a position in a governmental institution “from where did you get this?” The following is the details of the dialogue with the President of the Administrative Control and Transparency Authority:

The distinct position that Qatar holds at the regional level in the anti-corruption indicators, what are the implications of this classification?

There is what is called the Corruption Perceptions Index (TI) which is issued by the Transparency International Organization, as there are other international indicators with sub-indicators on corruption. This organization assess countries on the basis of the state’s success in fighting corruption through established procedures or laws or independent authorities that carry out this work. Also, there is a review of States through a mechanism by the United Nations which supervise on the extent of the implementation of the United Nations Convention against Corruption. In 2020, Qatar will be reviewed by a group of countries through a United Nations-supervised mechanism for States’ implementation of the United Nations Convention against Corruption.

And indeed, prior to joining the Transparency International Organization, Qatar has been fighting corruption through laws mainly from the separation of legislative, executive and judicial authorities, as well as an organized issue in the Constitution. Qatar’s accession to the United Nations Convention against Corruption in 2007 is a confirmation of the fight against corruption.

What procedures and criteria are used to reach good governance and integrity of the law to reach these advanced classifications?

These are all based on Qatar’s accession to the United Nations Convention against Corruption, whereas the accession to the Convention requires the creation of an independent authority to control and fight corruption. On this basis, the competent authority was established to achieve the highest indicators of integrity and transparency in public functions through projects sent to State institutions. For example, we have a project on transparency of information, which will be implemented with the Ministry of Communications. This project is supposed to have a positive impact on the social and economic level. We also have another project with the Ministry of Education to correct the concepts of integrity and transparency on fighting corruption.

What are the authorities entitled to the Administrative Control and Transparency Authority, are they authorities to control corruption, or is it role limited to awareness on the protection of public money?

The Control and Transparency Authority is the only entity in the country to have overall comprehensive control, namely administrative, financial, and technical control over all entities subject to its control, to the extent required to achieve the objectives of the Authority in promoting integrity and transparency in the field of the public function and work to fight corruption in all its images and forms. As well as, the