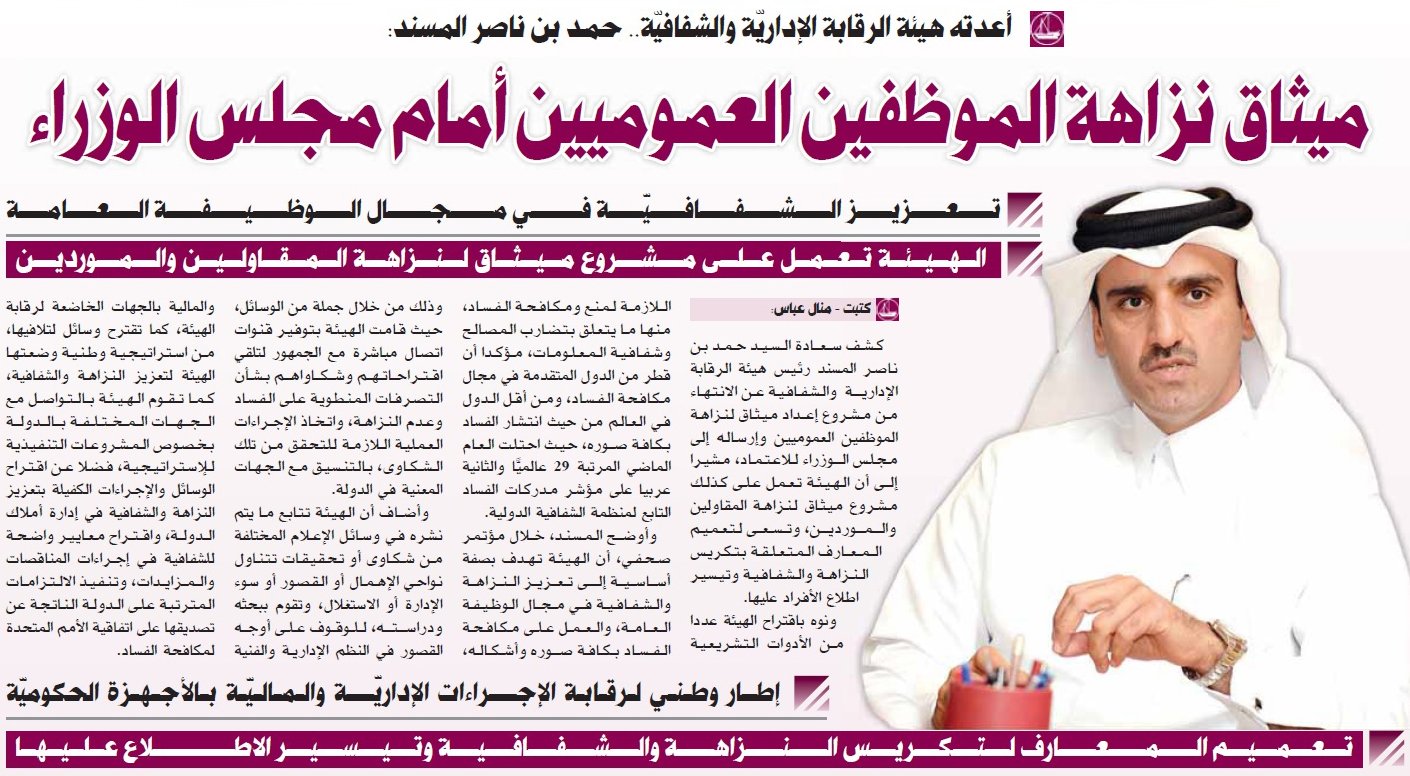 He referred to the Commission’s proposal for a number of legislative tools to prevent and combat corruption, including the conflict of interest and transparency of information, stressing that Qatar is one of the advanced countries in the fight against corruption and one of the least corrupt countries in the world. In addition, it is the second on Transparency International’s Corruption Perceptions Index.

Al-Missned said during a press conference that the Authority aims mainly to promote integrity and transparency in the field of public service and to combat corruption in all its forms through a variety of means. The Authority provided channels of direct communication with the public to receive their proposals and complaints about the actions Including corruption and lack of integrity, and taking the necessary practical measures to verify such complaints, in coordination with the concerned authorities in the State.

He added that the Authority is following up what is published in the various media of complaints or investigations dealing with the areas of negligence or inadequacy or mismanagement or exploitation, and research and study it to find out the shortcomings in the administrative, technical and financial systems in the bodies subject to the control of the Authority. In addition, it suggests ways to avoid them from the National Strategy for promoting integrity and transparency, which is established by the Authority. The Authority also communicates with the various State agencies on the operational projects of the Strategy, as well as proposing means and procedures to enhance the integrity and transparency in the management of State property. Moreover, to propose clear criteria for Transparency in the procedures of tenders and auctions, and the implementation of the obligations of the State resulting from the ratification of the United Nations Convention against Corruption.

The Authority has finalized its vision in cooperation with State institutions

A national strategy for integrity and transparency

HE Hamad bin Nasser Al-Missned stressed that the fight against corruption is a common responsibility of all state bodies, pointing out that the Authority finalized the final vision of the National Strategy for Integrity and Transparency, in coordination with all national authorities, by laying down the necessary foundations and policies to promote integrity and transparency in these bodies. Currently, discussing the operational projects of the strategy with the parties involved in the implementation of those projects. He said that, effective cooperation from all State bodies with the Commission for the public good, which was the surest guarantee and the only way to put those strategies and projects into practice.

On the most important features of the strategy, he explained that it includes 5 main axes, including the public sector, which focuses on enhancing the standards of public service behavior, combating conflicts of interest, transparency of information and promoting integrity and transparency in human resources and procurement. In addition, the private sector’s aim to promote cooperation between the two sectors public and private. Moreover, supporting private sector entities to report integrity violations, establishing corporate governance standards, policies and procedures and internal audit controls. Furthermore, the focus of legislation and law enforcement, which is concerned with the development of the legislative framework in accordance with the recommendations of the United Nations with regard to the Convention against Corruption. Although, the strengthening of law enforcement capacities and institutions, as well as the strengthening of anti-money-laundering measures, as well as the axis of public participation, school, universities, the educational institutions and the society’ awareness-raising and the axis of international cooperation.

He noted that one of the most important projects currently under way by the Authority is to strengthen measures of conflict of interest, as well as to enhance access to information.

Examine and study the complaints and investigations published by the media

For those subject to the Authority’s supervision, Al-Missned said that it includes ministries and government agencies, entities and companies affiliated to any of them, public bodies and institutions, associations, private institutions and other entities that carry out works of public interest. Pointing to a set of tools used by the Authority to control the ministries, government agencies and other entities subject to its control, including complaints, research and study of what is published or exposed to the press and other media complaints or investigations. Moreover, the authority and is working to develop the so-called national framework of integrity and transparency, It is a tool that monitors and measures the performance of government institutions and agencies.

Confidentiality in Handling The Complainant Data