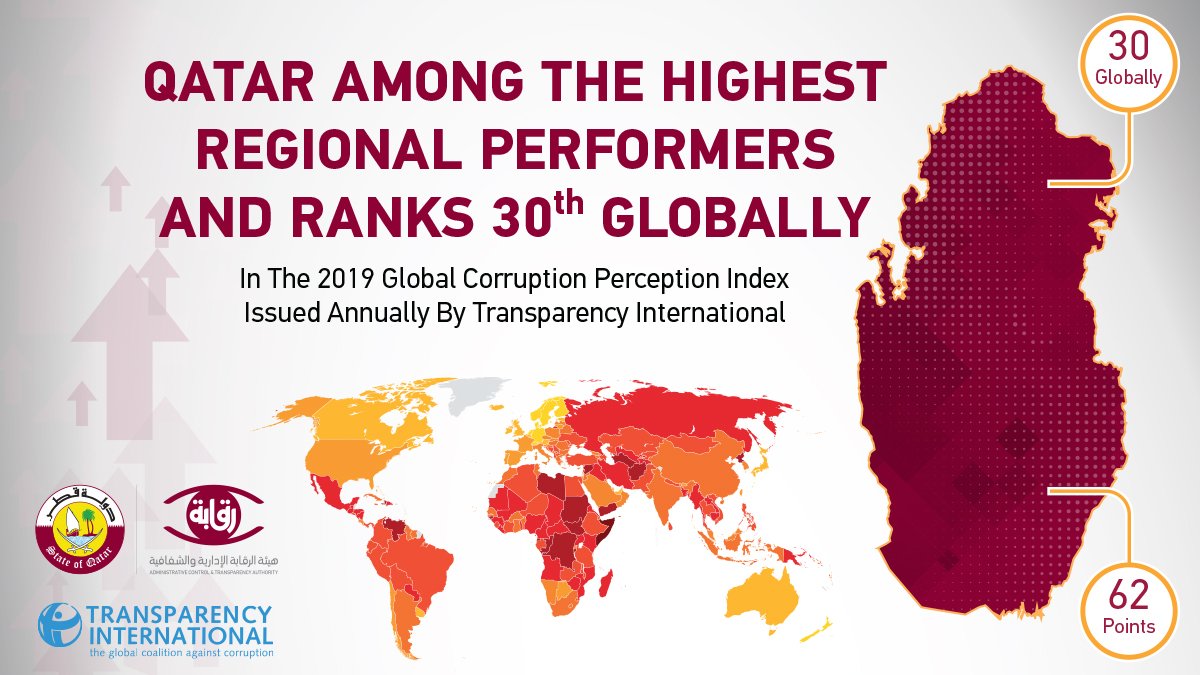 This year, Qatar ranked 30th globally out of 180 countries in the 2019 Global Corruption Perception Index, which is three places higher than last year. The State of Qatar achieved 62 points in this year’s index, which pushed it to the advanced position after it was ranked 33rd globally.

The results were stated by the Administrative Control and Transparency Authority (ACTA), in accordance with the results of the Global Corruption Perceptions Index issued annually by Transparency International (TI), whose results are announced annually and are considered the focus of many countries attention, investors, and development and human rights organizations worldwide.

The index measures the perceived level of the public sector corruption, which is based on 13 data sources, on experts’ assessment and business opinions, and its outcome depends on a number of sub-indicators that is issued by prestigious international organizations, including the World Bank, the World Economic Forum, International Institute for Management Development (IMD), the Bertelsmann Foundation and the Economist Financial Information Unit.

It is clear from the index results that Qatar is 23 points ahead of the average in the Middle East and North Africa – including Arab countries – which is 39 points, in light of a large number of countries decline. The organization pointed out earlier the negative impact of developments and factors of political instability and conflicts in the region, and its effect on the decline of many Middle Eastern countries on this indicator ranking.

Furthermore, TI indicated in the index report that Qatar is considered one of the top-performing countries in the region. The results of the index for the State of Qatar have confirmed, among many other international indicators, the success of the State of Qatar in maintaining its leadership and progress in several areas, including areas of integrity, transparency and anti-corruption, despite all the surrounding conditions, foremost of which is the unfair blockade imposed on it.

Also, the Administrative Control and Transparency Authority stated that since the index is being prepared in earlier periods of last year, many of the efforts made by Qatar in the areas of enhancing integrity and transparency have not been reflected in this index.