In an Interview with the President of the Administrative Control and Transparency Authority with the Editor-in-Chief of Al-Watan: Fighting Corruption Is a Common Responsibility of All the State Bodies 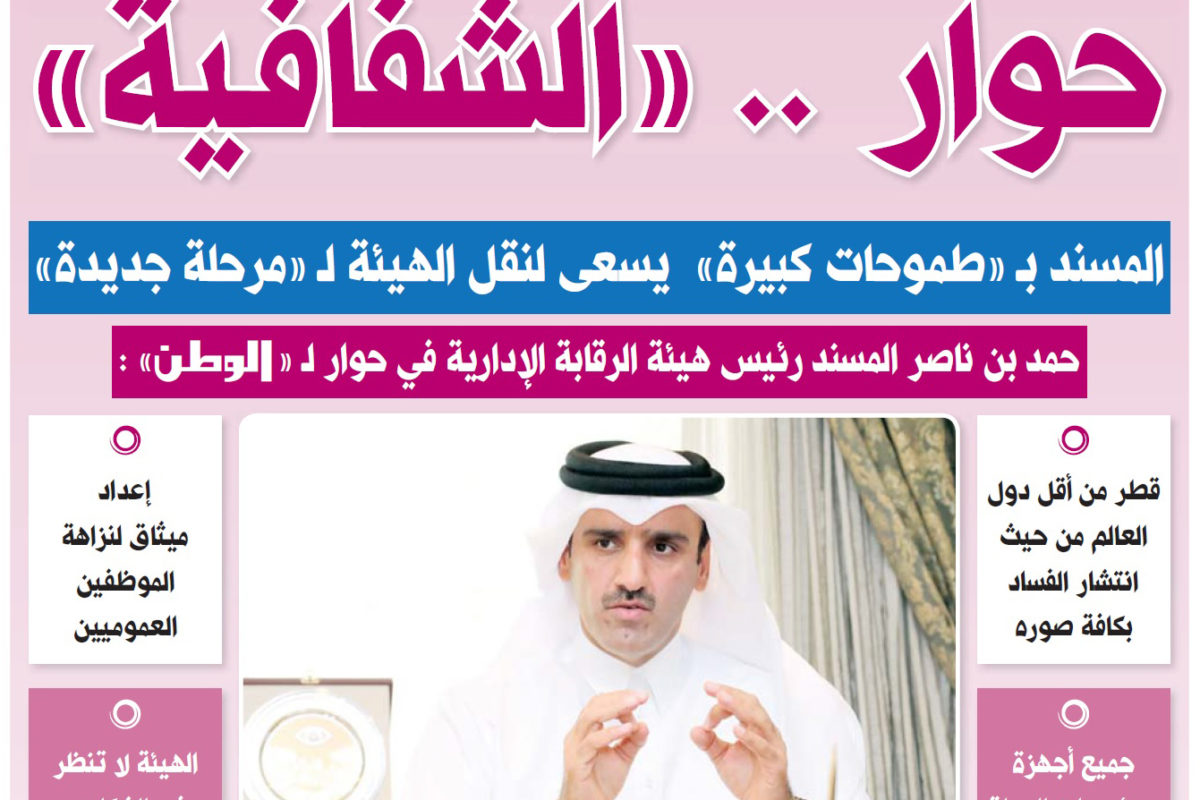 A few years ago, I wrote an article criticizing the performance of the Administrative Control and Transparency Authority because of its blindness and ambiguity in the performance of its tasks and its exaggeration in keeping away from the media, which made its role unclear to the public opinion. In contrast to its name and identity, which was expressed by the title of the article at the time (where is the transparency, President of the Transparency)

Honestly, the great personality and the noble man Abdullah bin Hamad Al-Attiyah – we ask God to grant him speedy recovery – did not get upset by the article directed at him by virtue of his presidency at the time, but as usual, his chest was wide and can accommodate all opinions.

A few days ago, I received a call from a dear friend who works for the Authority. He informed me that the president wanted to hold a transparent dialogue with the editors at the earliest opportunity to discuss the next stage and the challenges ahead. Which the president believes that the media is an essential part in bringing the image to the public opinion and contribute to the awareness of the community.

Frankly I do not hide that I was surprised by the invitation, despite my pride in it, for we in the newspapers do not find cooperation or interaction of officials in ministries and bodies in a satisfactory manner. Suffice it to say that the requests for dialogues crowded in the offices of ministers and do not want to talk for various reasons and multiple excuses ..!

And the fact that the request is from the Authority, which was known to be away from the media increased my surprise… and enthusiastic at the same time to complete the interview and dialogue, after a picture formed in my mind that the new president holds a different mind and great ambitions.

At 9:00 am, we were at the appointment in Barzan Tower, with an unexpected welcome; the President welcomed us to his office and welcomed the press at the headquarters of the Authority. He stressed the Authority’s role and the need for positive cooperation in the interest of the motherland. He also praised the role of all media in confronting the unjust siege and the unjust attack on the State of Qatar… And said: welcome .. You are the first journalist entering the office of the President of the Authority to conduct a dialogue… I answered him saying: this is a place of pride for me and «Al-Watan» .. as we were previously the first to criticize .. the President: we welcome criticism which is purposeful and we benefit from all that is proposed if this is an objective and useful proposition.

Honestly, from the first few minutes, I found myself in front of an ambitious and understanding official with a clear desire to move the Authority to another level with a new appearance that fits for the stage.

During the dialogue, which lasted about an hour, Mr. Hamad bin Nasser Al-Missned, President of the Administrative Control and Transparency Authority, revealed that after the recent announcement of the preparations for receiving complaints and proposals, the Authority received some complaints regarding corruption crimes and damage to public funds, which was examined. Stressing that during the examination of the complaints some ministries and institutions responded to and cooperated with the Authority, while some other organs did not respond and we are taking some actions against them.

He pointed out that the final vision of the national strategy for integrity and transparency has been finalized in coordination with all the national authorities by laying down the necessary foundations and policies to promote integrity and transparency in these entities. In addition, at the main time the executive projects of the strategy are being discussed with the concerned parties, noting that the Authority is also working to strengthen the measures of conflict of interest, and enhance access to information.

He pointed out that all the organs of the state are subject to the control of the Authority without exception. He pointed out that in the case of any person filing a complaint against a party, the personal data of the complainant is requested for the internal use of the Authority, and that these data are treated in strict confidence and not shared with the complainant.

Combating corruption is a common responsibility of all state agencies

.. Here is the text of the dialogue:

What is the role of the Administrative Control and Transparency Authority and the most prominent of its specialties?

The Authority aims to promote integrity and transparency in the field of public service, to combat corruption in all its forms and to achieve the highest levels of integrity and transparency by providing channels of direct communication with the public to receive their proposals. Their complaints about acts involving corruption and lack of integrity, and taking the necessary practical measures to verify such complaints, in coordination with the relevant authorities in the State.

The Authority follow up on complaints or investigations concerning the areas of negligence, mismanagement or exploitation that are published in the various media and these shall be examined and studied.

The Authority also works to identify deficiencies in the administrative, technical and financial systems in the entities subject to the Authority’s supervision and proposes ways to avoid them.

The Authority has also developed a national strategy to promote integrity and transparency. Currently, the Authority is in contact with the various authorities in the State regarding the operational projects of the strategy.

The Authority seeks to disseminate knowledge about the establishment of integrity and transparency and facilitate access to individuals. Moreover, proposes a number of legislative tools to prevent and combat corruption, including conflict of interest and transparency of information.

In the international arena, the Authority works to implement the obligations of the State resulting from its ratification of the United Nations Convention against Corruption.