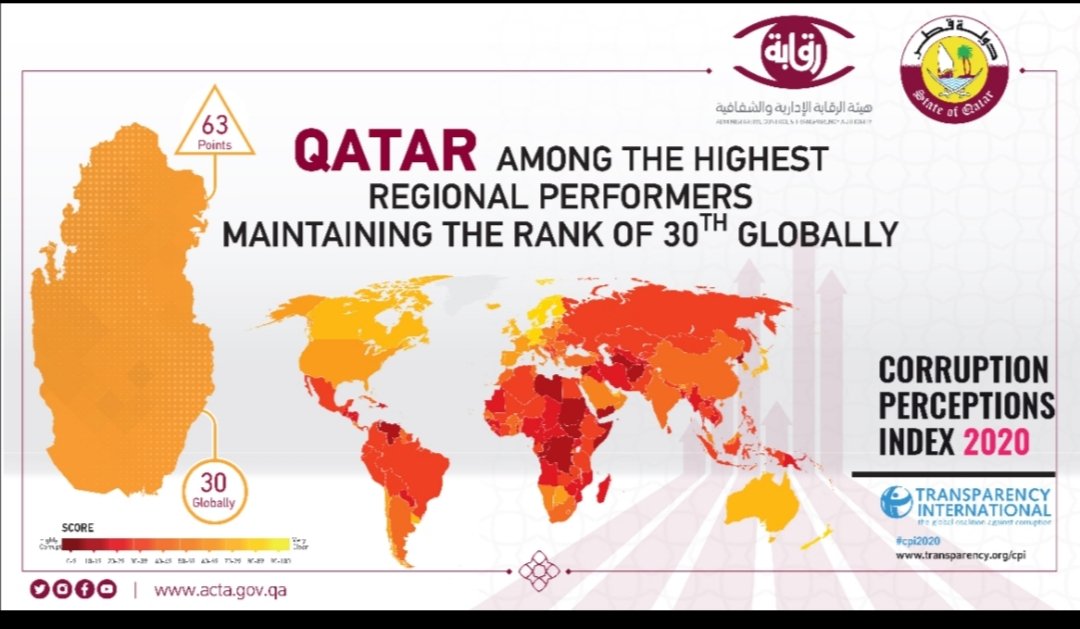 According to the Global Corruption Perceptions Index, Qatar ranks high in transparency and anti-corruption

The Corruption Perceptions Index 2020 highlights the impact of corruption on governments ‘response to COVID-19 and compares countries’ performance on the index to their investments in healthcare.

Transparency International (TI) announced the results of the Corruption Perceptions Index (CPI) for the year 2020 on: January 28, 2021. The State of Qatar achieved 63 points on the index, which made it ranked second among the Gulf and the Arab countries, and at the global level, the State of Qatar ranked 30 out of 180 countries and territories included in the index.

The index, which ranks 180 countries and territories according to perceived levels of public sector corruption according to experts and the business community, uses a scale from zero to 100, with zero being the most corrupt and 100 the highest level of integrity.

Also, it is worth noting that the index draws its data from several indicators issued by prestigious international organizations such as the World Bank, the World Economic Forum, the Bertelsmann Stiftung Foundation, the Global Integrity Organization, and the Economist Intelligence Unit.

This year, the index focused on “Covid-19 and corruption”, as reports show widespread corruption throughout the response to the Covid-19 pandemic, from paying bribes for Covid-19 tests, treatment, and other health services, to purchases of medical supplies and overall emergency preparedness.

In addition, the index reveals that countries that do well on the index are investing more in healthcare, are more able to provide universal coverage and are less likely to violate the rules or rule of law when responding to a crisis.

The results of the index this year come to confirm Qatar’s advanced ranking in the Gulf and Arab countries in the areas of integrity, transparency and anti-corruption, which adds to Qatar’s long track record in these areas, placing it among the most transparent developed countries in the world, and at the same time providing additional evidence that the State of Qatar is always on the bright side of the region and the world.

In this context, the State of Qatar attaches great importance to enhancing transparency and integrity, and it has taken great efforts that have resulted in advanced international rankings and an advanced position in the Gulf and Arab region on regional and international indicators, which are related to transparency and integrity, not just the CPI.

Also, to preserve the leadership of the State of Qatar and strengthen its position, as it stands in the ranks of the most transparent countries in the world, the Administrative Control and Transparency Authority (ACTA) takes many steps in enhancing the transparency and integrity of Qatar, within the framework of successful coordination between all national authorities in the state, which includes preparing a draft of the National Strategy for Promoting Integrity and Transparency and a Code of Conduct and Integrity of Public Officials’ Charter, issued by Cabinet Resolution No. (18) of 2020, as well as preparing legislative proposals in several areas, including transparency and office integrity, hoping that it will be reflected on the State of Qatar’s position on international indicators on both the medium- and long-term levels.

Furthermore, Qatar’s interest is not limited to implementing best international standards and practices in the areas of transparency, integrity and prevention of corruption, but at the same time to support international efforts in this field within the framework of cooperation with concerned international organizations, including the United Nations Office on Drugs and Crime, the United Nations Development Programme and the Organization for Economic Cooperation and Development, in many projects, initiatives and related activities.

The State of Qatar has several international initiatives in support of international efforts to enhance transparency and integrity and rid the international community of the devastating effects of corruption, and perhaps the most prominent of which is the launch of Sheikh Tamim Bin Hamad Al Thani International Anti-Corruption Excellence Award.